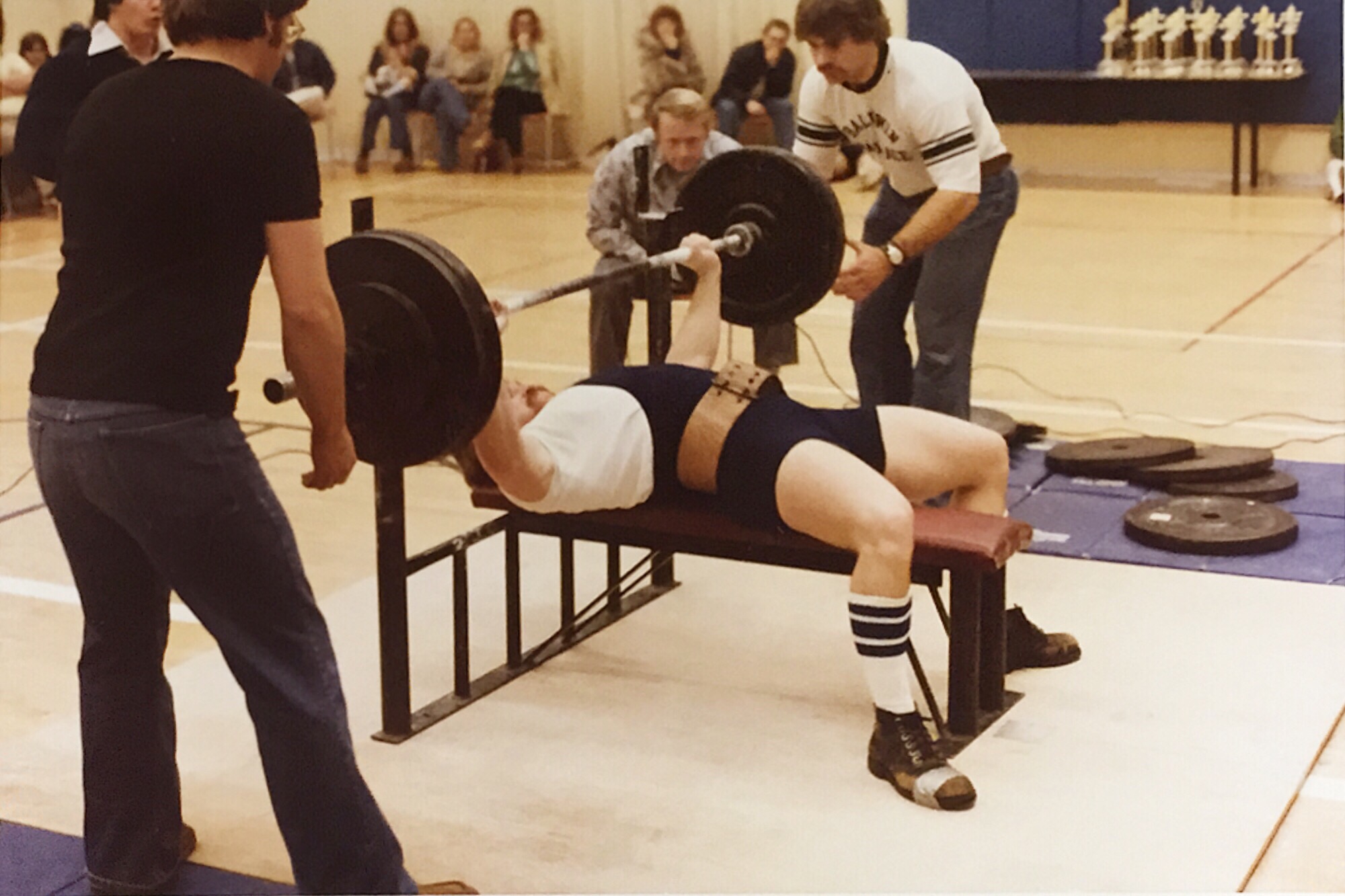 Many readers may not realize that I am involved in the training of pro-football teams and many college football and basketball teams. For example, the Kansas City Jayhawks and Utah Utes are heavily influenced by our training as it relates to speed strength. Two of the pro- football teams are the Green Bay Packers and the New England Patriots.

Not a bad group to be associated with, huh?

I also talk to a head strength coach that has been affiliated with a winning tradition in the NFL who tells me, although he is ashamed to admit it, that he has linemen coming into the league that can’t vertical jump 19 inches or squat 300 pounds. He related to me that these players are from “high-intensity training” (H.I.T.) schools and that this type of weight program is making his job next to impossible.

A pro-lineman told me while I was at their camp that when he was placed on the H. I.T. program in college, his team was the top 5th school his senior year. He thought he was strong until the combines. When he got only 12 repetitions with 225 pounds, he was embarrassed. He was picked by a pro-team that utilized our training and that has an excellent strength coach.

In 2 years this lineman did 17 reps with 315 pounds. He made a remark that machines and H.I.T. were useless. This got back to his old college team, who immediately banned him for life from their weight room. Gee, what a pity.

At Westside, we thought we would do some research on H.I.T. So Dave Tate and myself looked into this, I must say, misguided method. What is their viewpoint? Where was their research taken from? Why is it loved by some and despised by others?

First let’s look at the concept of intensity. Apparently H.I.T. views it as a feeling, like a pump, a term bodybuilders made popular. Is it a scientific term? No. Is a bodybuilder quick or explosive? No. If you know a converted bodybuilder who powerlifts, he almost always lifts well under what he appears to be able to do. Why? He has trained only the muscle, not the central nervous system. That is why smaller ball players are almost always faster and many times stronger based on percent of bodyweight. Bodybuilders develop no reversal strength or starting or accelerating strength. Any sport coach will tell you that acceleration is paramount in sports.

A. S. Prilepin suggested that to achieve the proper intensity, one should use the rep/set scheme shown in the table, to ensure the greatest development of speed and strength. He discovered that if 7 or more reps were performed at 70%, the bar speed slowed and power decreased. The same holds true when using 80% or 90%; once one goes above the rep range shown, the bar slows, which translates to less power. Doing fewer or more lifts than Prilepin suggests will cause a decrease in training effect.

Number of Reps for Percent Training

(Taken From Managing The Training of the Weightlifter)

Along the same parameters are the findings of Dr. Tamas Ajan and Prof. Lazar Baroga. They describe the zones of intensity as follows: 30 to 50% is low intensity; for speed-oriented sports; 50 to 85% is medium intensity; for force-oriented sports such as weightlifting; 85 to 95% is high intensity, for weightlifting and other sports; 100% and above is maximum and over-maximum Intensity, for the development of absolute strength.

Most authors who have studied strength as a physical quality examine it in four forms: absolute, speed, explosive, and strength endurance. The latter, strength endurance is basically all the H.I.T. program can possibly build. Strength endurance is characterized by a combination of great strength and significant endurance. It is needed by athletes who must compete for a prolonged period of time (3 to 4 hours) without diminished work capacity. Well H.I.T. may increase endurance, but it does not promote great strength; in fact, it eliminates it completely by neglecting the other three elements of strength: absolute, speed, and explosive.

Dave Caster showed me an interesting paper, Strength, Power and Speed in Shot Put Training, by Dr. Poprawski, Director of the Sport High Performance Institute in Toronto and former coach of world shot put champion Edward Sarul. First, Poprawski realized the importance of intensity zones as described by Prilepin and the importance of using one weight percentage per workout. For example, weights of 50 to 75% were used for training speed and power. Much like our training, this training is based on a true max of, let’s say, 500,600, or 700 pounds. Poprawski realized that a shot put always weighs 16 pounds; therefore he found that it was best to use one weight for a particular workout and to focus on increasing bar velocity rather than heavier weight to increase power. What was the key element for success? Speed, speed, and more speed.

Sarul was tested against other superior throwers, and while some could lift more weight, he was far ahead in tests of bar speed during the snatch and squats of 1 and 3 reps. His advantage in speed and the development of power was directly achieved by increasing bar speed, while the others fell behind from lifting too slowly. What does this tell us? Fast is good; slow is second team.

H.I.T. proponents use a lot of machines. This is truly a mistake. No stability can be developed. Most machines work on the peak contraction theory. Let’s look at the pec machine. If you load a pec machine to the max, starting the movement requires a max effort, which is very difficult and dangerous. Yet at the finish, where the most weight can be lifted because of accommodating resistance, machines show their downfall.

More importantly, let’s consider the strength curve. Take the case of two 700- pound deadlifters. One may blast the weight off the floor to near lockout and then fight the last 3 to 4 inches. The second may have difficulty starting the bar off the floor, pick up speed, and lockout easily. What does this illustrate? In the real world of strength these two lifters have quite different strength curves. If these same two lifters were to use a machine, only one would receive any benefit from that machine, because the machine has a predetermined strength curve. That’s a 50% chance the machine won’t work for you. Also, a machine will not build stability. The only good thing about a facility full of machines is that the instructor could be a moron and it won’t make any difference.

H.I.T. proponents for some reason think that explosive weight training is dangerous. One should know that explosive weight training should only be done after warming up past 25% of a 1-rep max. Look at the percent charts by Ajan and Baroga, and then start at 30%. Don’t push super-light weights explosively until you reach 30%. If you’re going to criticize something, you should understand it first. Finally I ask, is anything more dangerous than football itself?

H.I.T. proponents also think that if you exercise slowly, you won’t become slow. Have they heard of exercise specificity? A sprinter must practice sprinting to be successful. A long-distance runner must learn to conserve himself to run a long distance; if a marathon runner was to start sprinting from the beginning, he or she would run out of gas long before the end of the race. If you work slowly, you will become slow, and you will be watching the fast kids play while you develop splinters in your butt. Remember that external force is directly responsible for speed. A boxer may appear very fast with 8-ounce boxing gloves, but hand him a pair of 100-pound dumbbells and he can hardly move his hands at all.

Although I am not a proponent of the Olympic lifts, they certainly have a place in weight training. However, I must say the term ‘quick lift’ applies only to the snatch and clean and jerk when sub-maximal weights are used. With max weights they are no quicker than any other lift. That’s why we devote one workout a week to the dynamic method, with weights close to 60% of a 1rep max, for multiple sets of 2 or 3 reps and with short rest periods, almost exactly duplicating the play time and rest time of football.

H.I.T advises you to work to failure, especially in the concentric phase, sometimes up to 10 to 15 seconds. They call this an isometric rep. Well, if you were to exercise for that length of time, which is much longer than a football play, it would be of absolutely no benefit. A good friend of mine was at a football conference and watched a demonstration in the deadlift for reps. The person did 20 or 25 reps with 425 pounds. Wow, what an effort! But did he recover in 35 seconds, the time period the football game requires? Absolutely not! Wouldn’t it be more beneficial to exercise for 7 to 8 seconds and repeat a set of weights? That’s how the game is played, right? A workout like that described above is fine for a 2-week mini-cycle, but no longer. A pro-boxer trains for a 3-minute round using training intervals of 3 minutes and a rest time of 1 minute. Football should do the same. Active work should duplicate a play and rest cycle. The friend I am referring to is a coach who is a two-time all American. Using our program, he currently has over 68 men who can power clean 300 pounds or more, out of 90.

I give credit to the recruiters for teams who use H.I.T.. They pick skilled people who can sometimes survive H.I.T., but the linemen cannot survive. If you watch the Heisman Trophy winner who was on the H.I.T. program as a college athlete and is drafted by a pro-team who uses H.I.T., invariably he is nonproductive or injury-prone.

Guys, if you want to play for pay, check out the weight facility. If there are more machines than weights and you’re not in the snack room, think twice before entering. The truth is the H.I.T. philosophy comes from companies that sell machines. Even Arthur Jones realized that doing one set to failure was a mistake and retracted his statements years ago. It was merely a ploy to run as many customers through a facility as possible. It was later popularized by Mike Mentzer; a successful bodybuilder in the late 1970’s and early 1980’s. His claim to fame was the one-set-to-failure system. He was, I might add, the only one to use it successfully.

It’s not a good idea to try to be the exception to the rule. Instead, follow the accepted methods of weight training by working on the many types of strength that are needed in a sport. Just remember what Bill Starr said: only the strong will survive.

Zawieja, Martin. Periodization of Training for a Methodical Development of Performance in Olympic Lifting-Bundesleague. 1988.